Projectors are ideal in settings where you want to transfer words and images from your computer to a screen so that a larger audience can see it as you present. Finding the right fit projector for your classroom, church, or boardroom does not have to be a difficult one. Here we will review basic terminology and functions that will help you find the perfect projector and screen for your next presentation! 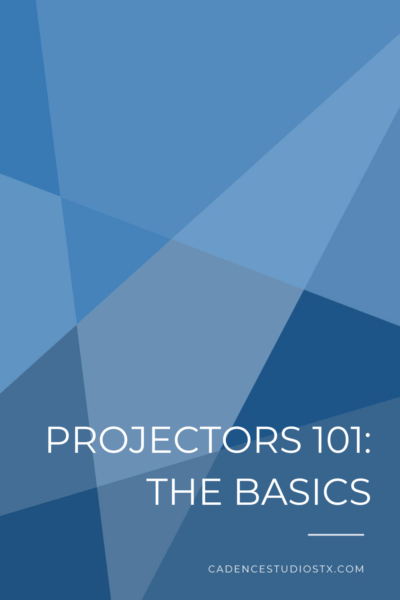 A projector is an output device that takes images from a computer screen and displays them on a screen, wall, or other flat surface on a much larger scale producing still slides and moving images. There are two main types of projectors: digital light processing, also known as DLP, and liquid crystal display, or LCD.

LCD projectors have a sharper and clearer image capability, better color in ambient light, no rainbow effect, and images that are overall quieter. However, you will have more visible pixels, overall poorer contrast, and a black that is more a light gray color.

DLP projectors are lighter, portable, and tend to be more reliable. Along with the portability you get a higher contrast, pixels that aren’t as visible, and an overall smoother video. Though with DLP projectors you will get some rainbow effect and less vibrant reds and yellows when operating it at full power.

Another thing you’ll want to decide on is if you want a fixed projector or a portable one. Fixed projectors are heavy and installed permanently, so this would be a better option for a church or business that will be using the same room time and again for projection. Portable projectors are better for classrooms, churches, and any other setting where it will constantly be changing position.

As a general starting point, you will want a projector screen that is 12 inches in height for every 6 to 10 feet of viewing distance.  Of course, other things in the room as well as audience size will alter this a bit, but this is a good starting point. When it comes to screen resolutions, an XGA resolution that is 1024×768 is good for classrooms and churches as it displays text very clearly. There is also widescreen content you will want an HD 1920×1080 resolution or a WXGA 1280×800 resolution. This guarantees that everyone can see the screen images wherever they are seated in the room.

Lumens are the brightness level of the white and color portions of the image. 1500 lumens are the minimum a projector should have and is good for home theater projectors or spaces with limited ambient light. Classrooms, churches, and conference rooms with windows need to have a projector with at least 2500 lumens while larger rooms such as lecture halls and auditoriums will need more than 2500 lumens.

Projectors allow you to do almost everything a TV monitor can do while taking up no wall or floor space in your room. They are a relatively low-key solution to presenting your material to your audience in a clear, bright, and fun way! Whatever specifications you decide to go with, be sure to always check reviews on the equipment you are considering and weigh what will work best for your space and purpose.

Other insights worth reading